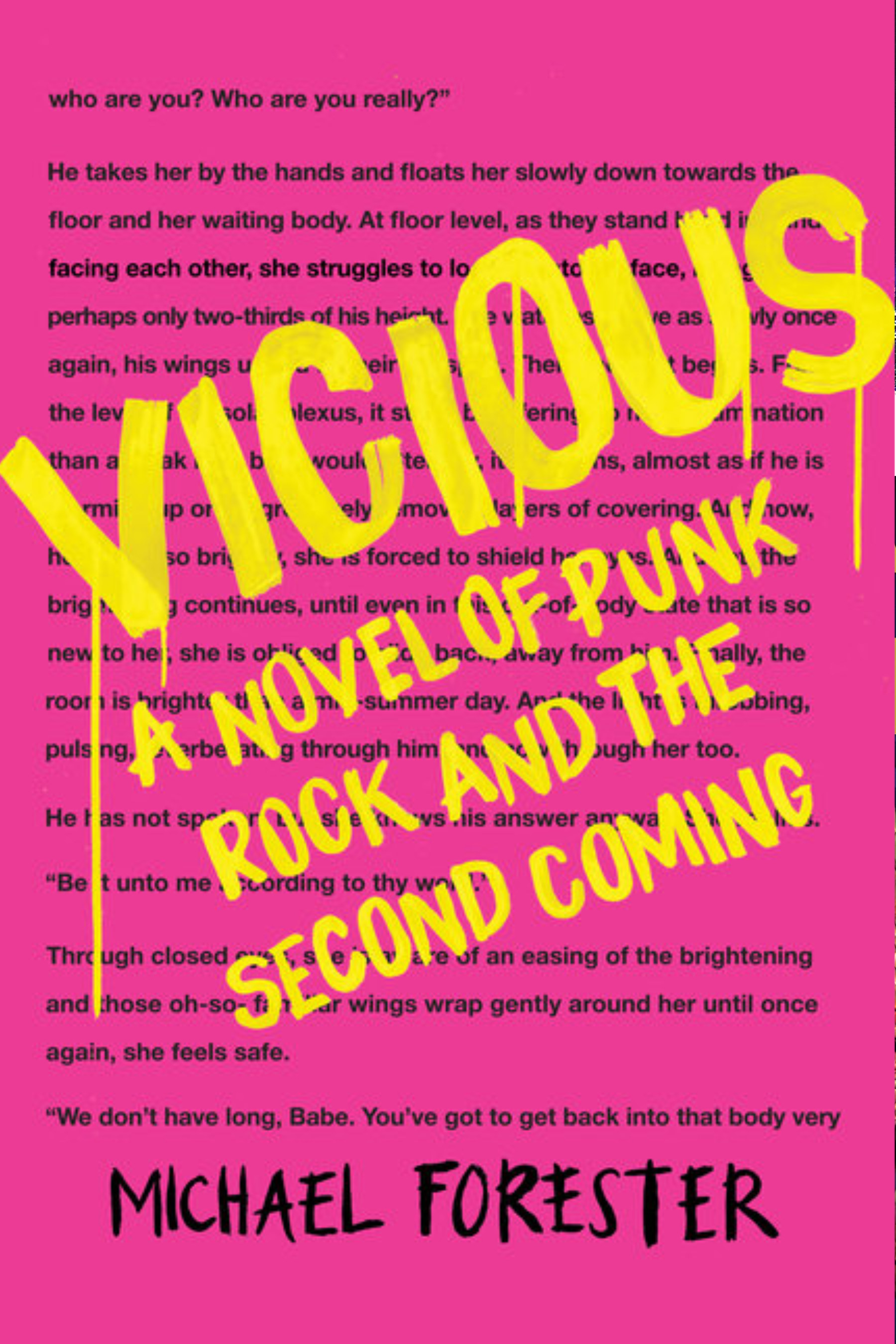 Vicious: A novel of punk rock and the second coming

It’s 2008. For thirty years, Tolly’s been waiting for the reincarnation of rock star Sid Vicious who’s definitely coming back to love her forever. Now that she’s certain she’s found him in the form of young Henry, Henry’s girlfriend Laura has to be eliminated, doesn’t she?

But… something’s not right. Because when Tolly kidnaps Laura, hovering in the background are unearthly wispy creatures – Ethereals, they call themselves. Is Laura being protected by forces Tolly doesn't understand?

Could Laura really be miraculously pregnant with the second coming of the Messiah, as Pastor Littlemann insists? Or is she just as insane as Tolly?

Vicious is a cracking good read, guaranteed have you guessing right up to the final pages as to what’s really going on.

What an absolutely fascinating book! Not normally a genre that I would take to but the writing style was so good and the way in which the action progressed (and regressed!) was very cleverly done. It kept me entertained all the while I was reading it and would thoroughly recommend it if you have enjoyed other of Michael’s books or would like to have a good read of something a little different – excellent!

The Story so far:

She’s not sure where she is. At home? At Henry’s? It’s dark. She’s drifting in and out of trance…delirium… sleep… whatever. She can’t wake up properly and there are nightmare images passing in front of her face. A huge fat woman with a knife and purple hair. She looks familiar. Punk rock music somewhere. A wispy shimmering creature floating in the corner of the room, its face leering at her. Ropes holding her to a bed. She’s wet and she’s cold. She thinks she might have wet the bed just like back when she was small. She’s not sure how old she is. 4? 20? She can’t tell. She wants to get up to change the sheets. But when she tries to rise from the bed, she can’t. Are the ropes real? Is she sick? Very, very sick? Has she taken something that’s making her like this? She can’t quite get it all into focus? And when she tries to call for help, she can’t move her lips. It’s almost like something’s stuck on them.

It’s insane. She has to be hallucinating. None of this can possibly be real. Tracey from Matthis. A big knife scraping up and down her tummy like she was in an Edgar Allan Poe story. Tracey… no… Tolly jamming the knife into the pillow by her face. Herself screaming. That sickening wispy creature hovering over them, leering, excited. Then, it all changed. Tracey… Tolly left the room. The wispy thing followed her. Alone; then music; but not punk rock. A tune she half recognises from… when? Floating upwards, eyes closed; to heaven? Is she dead? The music isn’t quite… music. Someone is humming. The memory of the tune is coming back. And now, the words start to form in her mind… “Cloudy night… shining light… shine on til tomorrow.” She dares not open her eyes yet. Her heavenly hallucination must be with her again. She knows now her conversations with Mary, Mother of God have not been real, but there is some comfort in them nonetheless, some respite from this terror-filled dream from which she seems unable to escape. A few words with a fictitious Mary would indeed be comforting right now. So, she opens her eyes; and sees. She is indeed floating. Just below the ceiling. The humming is coming from beneath her. She looks down, a little vertiginously. Below her on the bed is her own semi-naked body, tied spreadeagled to the bedposts. At any other time, she would be embarrassed by the immodesty. But it’s hardly a priority now. She becomes aware that the humming has changed to soft, almost whispered singing. And the words are unambiguous now. And when the broken-hearted peopleLiving in the world agreeThere will be an answer, let it beFor though they may be partedThere is still a chance that they will seeThere will be an answer, let it be There are feathers floating all around the room. They must have been released from the pillow when Tolly stabbed through it. Sitting casually on the chest of drawers, arms folded, legs stretched out in front of him, ankles crossed, is the singer. He stops. He looks up at her with a raised eyebrow. He is enormous. Even at this angle she can see he must be over two and a half metres tall. But that’s not what impresses her most. She would never have guessed when she was little that they were so big. But he is holding them fully extended and the tips are touching both walls. His wing span is a little short of four metres. He stops singing and looks up at her. He smiles. “Hey, Babe.”

“Wake up, Babe.” She opens her eyes. She is still floating near the ceiling, but vertically now and he is with her. They are floating, not flying. His wings are folded onto his back. “Oh, Gabe!” she whispers. “You came back.” She throws her arms around and wants to hug him forever. When she finally does release him, she says, “But Gabe… how come I can see you? You’re supposed to be invisible.” “Same reason you can see yourself down there, Babe. You’re out of body. Astral Plane-ing, your people call it. “Pastor says that’s of the Devil.” “Yeah? Well, he’s not the only one who can do it, believe you me.” “And Gabe, you’re enormous! However did you fit in my little cupboard?” “Same way your soul fits into your body, Babe. But listen, we don’t have long, so it’s really, really important you listen closely to me, ok? In a moment, you’re going to have to get back in your body. And Laura, that’s going to be scary and it’s going to hurt. And it’s going to be hard for you to believe I’m still here, because once you’re back in your body, you won’t be able to see me again, OK?” She is aware, for the first time, of the absence of pain in her present state. “Can’t we just stay like this, Gabe?” “You have work to do, Babe.” “What work?” He looks at her quizzically. “I thought you knew. I heard Him say it to you.” “What?” “Thou hast found favour with God. And, behold, thou shalt conceive in thy womb.” “Oh, Gabe. Don’t make a fool of me. I’ve been through this already. I thought it was me. I thought God had chosen me to bear SecondCome. But I’ve never had sex and I’m not pregnant.” He looks back at her reproachfully. “I bled, Gabe,” she continues emphatically. “On Monday. That’s four days ago. I’m not pregnant.” “Where did you bleed from, Babe? She thinks first that the question is unusually personal, particularly coming from him. Then her attention shifts to the throbbing in her hand and the blood on her palm. “Babe, didn’t you ever read, ‘The Holy Ghost has come upon thee, and the power of the Highest has overshadowed thee: therefore, also that holy thing which shall be born of thee shall be called the Son of God."” And now, she begins to see it; begins to see how little she is in the world and how great her God is; how long He spends planning for and how short her life is. She thinks back over the hope and the belief and the uncertainty and the devastation. Immediately, she is sorry for doubting him. But that doubt is now in the past forever. She hesitates. “Is there something else, Babe?” “There’s something I want to ask. I think I know the answer. But I need to ask it anyway.” “Ask anything, Babe.” “Gabe, who are you? Who are you really?” He takes her by the hands and floats her slowly down towards the floor and her waiting body. At floor level, as they stand hand in hand facing each other, she struggles to look up into his face, being perhaps only two-thirds of his height. She watches in awe as slowly once again, his wings unfold to their full span. Then, the light begins. From the level of his solar plexus, it starts by offering no more illumination than a weak light bulb would. Steadily, it brightens, almost as if he is warming up or progressively removing layers of covering. And now, he shines so brightly, she is forced to shield her eyes. And yet, the brightening continues, until even in this out-of-body state that is so new to her, she is obliged to glide back, away from him. Finally, the room is brighter than a mid-summer day. And the light is throbbing, pulsing, reverberating through him, and now through her too. He has not spoken, but she knows his answer anyway. She replies. “Be it unto me according to thy word.” Through closed eyes, she is aware of an easing of the brightening and those oh-so- familiar wings wrap gently around her until once again, she feels safe. “We don’t have long, Babe. You’ve got to get back into that body very soon. And when you’re there, this is what you must do.”